Head downtown Thursday night, December 31st, as once again the countdown to the New Year in Flagstaff will be headquartered at the Weatherford Hotel.  The intersection of Leroux and Aspen has become the center of all attention in downtown Flagstaff each New Year’s Eve.  The spectacular, twinkling, 6-foot pine cone is in place, to be lowered at the stroke of midnight to usher in 2016.   (Also, traditionally dropped at 10:00 p.m., coinciding with the New Year celebration in New York City, for families who like to get home early.) 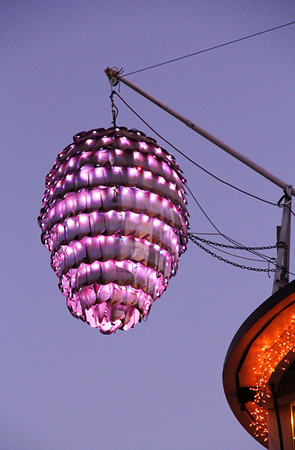 The Pine Cone Drop from the Weatherford has been a Flagstaff tradition since 1998.  Lowering a pinecone’s not so odd when you think about our spectacular, surrounding ponderosa pine forest.  But what’s become our tradition has become a tradition in other towns across the land as well, with an assortment of strange and not-so-strange icons, “dropped” to celebrate the New Year.

Of course there’s the traditional 12-foot diameter, multi-colored Waterford Crystal ball, dropped in New York City.  A lighted ball has been dropped in Times Square since 1907, the first adorned with 100, 25-watt bulbs.

But how about the traditional 20-foot, 600-pound walleye, named Captain Wylie Walleye, in Port Clinton, Ohio?  (Walleye is a game fish that puts Port Clinton on the map on the shore of Lake Erie – “Walleye Capital of the World.

In eastern Arizona, they drop a deuce of clubs at midnight in Show Low, a tradition that just began in 2012.  According to legend, the origin of the town’s name is derived from a game of poker where the winner showed a deuce of clubs, the lowest card in the deck.

In tiny Dillsburg, Pennsylvania, what else would you drop but a dill pickle, positioned to drop into a barrel.  It’s not just any dill pickle.  “Mr. Pickle” is 8 feet tall and wears a bow tie and top hat.

Not too far away in Hershey, Pennsylvania, they drop a giant, foil-wrapped Hershey Kiss at midnight.

In Atlanta, at what’s billed as the largest New Year’s Eve celebration in the Southeast, the Atlanta Peach Drop draws upwards of 100,000 people.  (That’s 50 times the entire population of Dillsburg, PA.)

In other locales across the land you might see a sardine, a sausage, a possum, a stuffed goat, a ukulele, smashing watermelons, or a Crayola crayon, so celebrated.  (See a list at Wikipedia.)